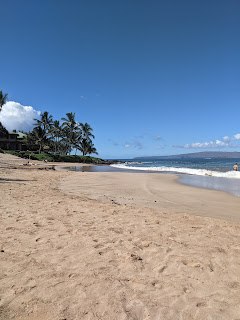 In the morning, we visited the famous Wailea Beach. All beaches in Hawaii are public. In this case, this white sand beach is partly in front of the Four Season resort, one of the world's great resorts, but there is no charge to use the beach. Our B&B provides beach umbrellas, which are really helpful in the (almost) equatorial sun. 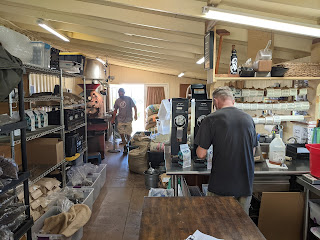 I spent last night souring the internet for coffee farm tours on Maui. I found one, an elaborate tour with breakfast or lunch at O'o Farms. I had hoped to see another farm, but I previously blogged about visiting a farm in the Kona area on the big island. The Maui-based O'o tour costs $94 per person, and that's more than I want to spend. In my searching, I found MauiCoffee.com, which mainly points to their "The Coffee Store" retail shops. However, they have a roastery in northern Maui, in the upcountry. near Haleakala. The web site says to contact them first, but they also showed operating hours. I sent a Facebook message but did not wait for a reply. The distance was about 25 miles, not really all that far.

A GPS always helps, but in this case, it was crucial. We set off from Wailea and veered off the main road toward the little town of Haiku. This roads were good but winding and we eventually got to an altitude of about 1200 feet. We turned a couple times in the Haiku area and the GPS insisted we make a left turn off the paved road and travel another 0.2 miles. We found the loose stone tire tracks and proceeded past a rooster farm. Yes, at least a hundred rooters were pecking around little triangular shelters. We found out from the coffee guys that this farm (unaffiliated with the coffee) was involved with the cockfighting industry. Cockfighting is illegal in Hawaii (if only a misdemeanor), but raising fighting roosters is not illegal. Most likely, the roosters are exported, probably to Guam.

So anyway, we proceeded down the tire tracks to the end, in front of a barn and residence. We got out of the car and saw a business registration sheet on the window for "The Coffee Store". We looked into the doorway, and two men were in the room full of equipment and supplies. Jordan and Jay greeted me and then Susan came into view. Jordan's wife had just mentioned the Facebook post, so they had some warning and I confirmed my name. Jordan was actively roasting beans, and while we were there, he opened the oven and poured out hot, roasted coffee beans. The aroma was amazing. In this case, he was roasting Mokka beans, a specialty bean found on Maui.

Pure, 100% Kona coffee from the big island is the most expensive Hawaiian coffee, usually $40 per pound or more (retail, roasted). Pure, 100% Maui coffee is a bit less expensive, $30-35 per pound. South American and African coffees sell for about $20 per pound. Hawaiian coffee is good, but I doubt anyone would says it's twice as good. The higher price is apparently due to high labor costs and presumably environmental regulations and taxes.

This roastery acquires beans from Hawaiian and South American areas and roasts various pure and blended products. We purchased two pounds of Maui beans, a standard pure bean and a Mokka Peaberry blend (but 100% Maui).

We drove to a nearby vegan restaurant. 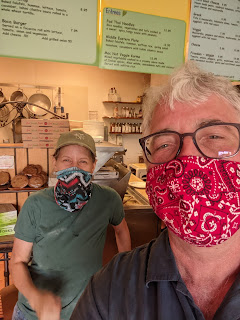 Pictured are the owner, Cindy, and Gary. We went to the same high school in Liverpool, NY. I have met Cindy's bother, so it was nice to get a chance to stop by. We bought a couple salads.