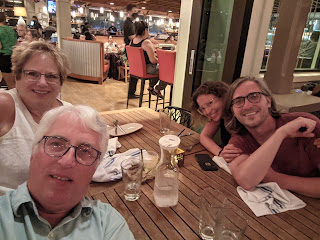 This photo is from day 12, our last dinner with Dan and Lauren at the Monkeypod restaurant in Kihei. Dan and Lauren would leave for home on day 13 while Susan and I would head to Oahu.
The next two photos are from a two-hour catamaran cruise from Waikiki to Diamondhead and back. We got a good deal from Travelzoo, but there was some "pin number" confusion among customers who got that discount. We are constantly logging in to this or that web site with our cell phones in order to check in to some event, and it causes delays. The hotel needed to see our Hawaii official registration, the restaurants require custom registrations for contact tracing, and they all advertise through multiple tourists web sites with their own procedures.
The cruise was nice, although there is a bar on the boat, which means half the customers decided to pay over $100 for a cruise and open bar, but they ultimately don't care about the cruise and are sometimes loaded before they get to the boat. One woman yelled, "Cuckoo!" about ten times, which sounds inexplicable, but alcohol was presumably involved. Susan and I really just wanted a boat ride, so we did not drink.
We then got an Uber to a tiki bar called "Skull and Crown", in Honolulu's Chinatown. The driver could not seem to find a way to get onto the correct street (Chinatown is a maze of one-way streets with no-turn signs), so we had to walk the final half block. The bar itself is pretty cool, but the nearby street corners are populated by the denizens of the night. The cops won't let the locals loiter in front of the bars and restaurants, but if the Uber driver can't actually get to the address, the passengers need to figure out where they are and walk through the crowds. Honestly, a half block separates a really cool tourist bar from people sleeping on the sidewalk.
We are planning to visit Skull and Crown again tomorrow with a reservation for the coolest room with the shrunken heads and tiki music, now that we know the drill on how to get there. 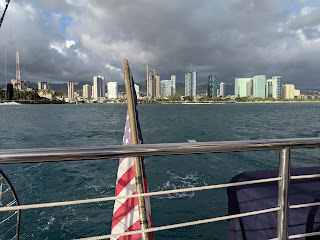 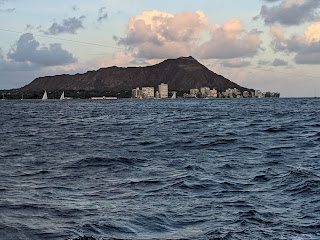