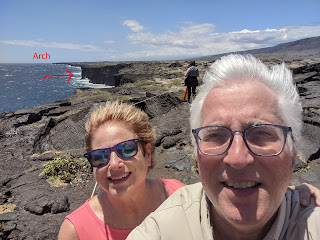 The photo above is from the end of Chain of Craters road. See below for more info. Also, some comments at the end about car rentals.
We left the resort at 7 am for Hilo, about an hour and a half drive. There is an outdoor marketplace (crafts, farmers' market, etc.). We saw wild goats and wild pigs on the road, and lots of dried lava fields. Huge areas are covered with black, pumice-like rocks. From the car the areas look like roughly tilled soil, but it's all rocky, no soil. Tufts of beige grass grow in these areas, that's about it. The Waikoloa area has been dry and there were some wildfires about a month earlier, but we saw no signs of fire. 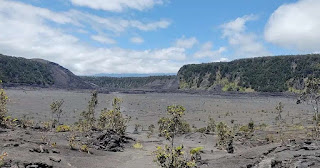 We proceeded to Volcano National Park. Greg, Dan and Lauren hiked down to the lava lake at Kilauea Iki, which is a hardened area of lava left after an eruption. The shrubs in the photo are people-sized, so this is a large area. Kilauea erupted in 2020, but there are currently no active lava flows in Hawaii. The hike is 4 miles round trip with an altitude change of 400 feet, and the air temperature on the lake was 85 degrees plus in direct sunlight, so Susan and I did not do that hike.

Susan and I took the road trip down Chain of Craters road to see several areas of previous eruptions and hardened lava flows. The beginning is in a rainforest, and the road runs to the ocean where lava has hit the water. After the lava cools and hardens, the crashing waves erode the rocks and sometimes cause holes, including the arch in the photo at top (you'll need to enlarge the photo to see it). Here is a stitched panorama of Laumanu Crater.

We then visited the Thurston lava tube, which is a tunnel high enough to walk through. This was the site of a lave river that partially hardened, followed by more lava, and then more hardening, but resulting in a tunnel. Also, we visited the Punalu'u black sand beach where sea turtles poke around in the shallows. 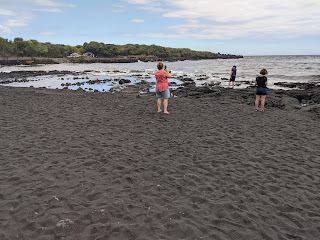 Around this time, Greg's eyeglasses case disappeared containing his regular glasses (not sunglasses). After much searching, and even phoning the park visitor center to check the lost & found, Dan found the case under a car seat. But, leave it to the Gocek boys (all three of us, Gary, Greg and Dan) to find an excuse to make a joke about butts. I won't try to repeat the exact jokes because "you had to be there", but Lauren found out the hard way that one never tells another butt joke in front of the Gocek boys, because it only encourages us. Trust me, it was a a series of funny family moments.

We finished the day with dinner at the Kona Brewing Company and a chocolate shop.

Regarding car rentals, I looked a couple months ago for a car on Maui. All cars at the airport offices were booked for all companies, but I found an Avis office near our B&B with a Mustang for about $90 per day. Dan noticed today (during our trip) that Enterprise had cars at the airport office for about $50 per day (for a Corolla), and I was able to cancel Avis and switch to Enterprise. We could only imagine there was a steep drop in reservations due to Hawaii's discouraging remarks about travel, so cars became available at a lower price. (Avis had cars but at the same price,)