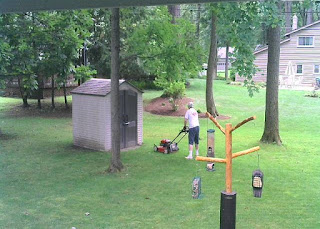 Our trip to France starts in 2 days. Watch this space for daily info and photos once we get there.The most recent post appears at gocek.org.

The lawn is mowed and the suitcases have been dragged out of hiding. Even our wills are updated.

We have a folder full of vouchers and tickets, many of which refer to a booking of some sort that needs to be confirmed. I guess I will get used to making phone calls in France (although I can always ask the hotel to help).

Yeah, that really is me mowing the lawn, captured by the backyard bird cam.
Posted by GaryGo at 11:08 PM No comments: 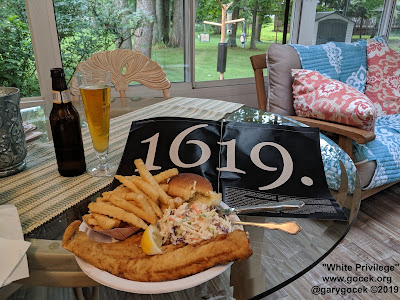 Posted by GaryGo at 7:40 PM No comments:

Our trip to France starts in 16 days. Watch this space for daily info and photos once we get there. For now, a few practice posts. The most recent post appears at gocek.org. 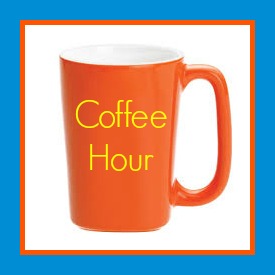 Two topics today (before we travel) that will require revisiting after we get to France: Coffee and Church

Although we have many events planned, we'll be in France for 15 nights and will have free time. I have become a big fan of premium coffee over the last few years, as served in America. I drink a little espresso, but it's not something I sip on for a half hour (because the little cup is empty after three sips). According to the internet, shops in France prepare coffee in forms close to what we Americans think of as espresso.

I rarely put milk or sugar in my coffee, so it seems like I will need to experiment a bit. And that may not be so bad; after spending a couple weeks in England, I found pub beer at its pub temperature to be very enjoyable, and it remains different than American beer even in these days of craft brews. I have not traveled to Europe since 1990, so I am looking forward to writing my review of the French coffee scene.

Along with coffee, I am also a committed Episcopalian, which is the American denomination within the Anglican Community. Historically, "Anglican" refers to the church of England, started by Henry VIII when the Roman pope wouldn't annul Henry's marriages. We probably won't attend a church service in Paris, but there is an Anglican church in Nice, "Holy Trinity Nice" ("Sainte-Trinité Nice"), and this is where we can really meet the locals.

While we're in France, we will meet many people, but most of them will be serving us in some way (hotel staff, tour guides, etc.). But, by attending a church service, we will meet fellow Christians (specifically, Anglicans) in their local house of worship (and one wonders whether the concept of "coffee hour" is universal).

I might drink a few glasses of wine in France, but I am also hoping for great coffee and church experiences.
Posted by GaryGo at 7:16 PM No comments:

Our trip to France starts in 17 days. Watch this space for daily info and photos once we get there. For now, a few practice posts. The most recent post appears at gocek.org. 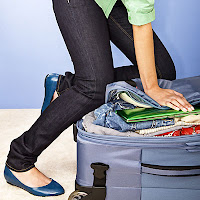 We visited our travel agent today to pick up our final bits of travel information. Most of our transportation arrangements have been in place for a while, such as flight and train info, but we picked up invoices for some pre-planned group tours and asked a few final questions (like, will our room be ready at 8 am when we arrive at our first hotel - um, maybe).

I think travel agents are still relevant, especially for long trips. You can spend your life reading customer reviews for Paris hotels and still not be sure of what you'll find when you get there, but most agencies send their agents to the major tourist locations and have lots of recommendations and advice. Agencies have access to discounts that aren't available to private travelers. The internet does indeed make it possible for individuals to book everything on their own, but my experience with travel agents has always been good and financially beneficial.
Posted by GaryGo at 7:04 PM No comments:

Our trip to France starts in 25 days. Watch this space for daily info and photos once we get there. For now, a few practice posts. The most recent post appears at gocek.org. 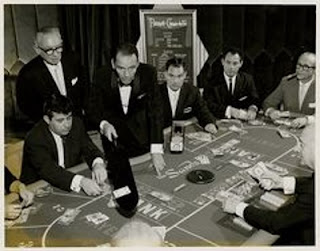 So yeah, I had this idea that I would wear a tux into Salle Médecin, the room at the Grand Casino in Monte Carlo where Pierce Brosnan (as James Bond) plays baccarat in "Goldeneye". Well, it turns out, although there is a real-life dress code in the evening, tuxedos are not a thing.

There is some talk in the forums that dressing well attracts better service and especially may help when the staff is controlling access to crowded areas. But, you don't want to go overboard. We're just hoping Monte Carlo isn't as casual as Vegas, where Americans dress like they just got out of the all-you-can-eat buffet.
Posted by GaryGo at 11:08 PM No comments:

Our trip to France starts in 27 days. Watch this space for daily info and photos once we get there. For now, a few practice posts. The most recent post appears at gocek.org.

Wow, my spellchecker really doesn't want me to type French words. But AAA wants me to have euros, so we got some in preparation for our trip to France. I think we got a good exchange rate ($1.19 per euro when the official rate was $1.11). When we get to France, I will be interested to see what my credit card company charges me. The word on the street is that there really is no such thing as "no foreign exchange fees". You either pay a fee, or you pay a less favorable exchange rate.

I have my high-security blazer with lots of zippers and buttons and such. I got an A/C voltage converter, too. Most devices can be plugged in to the wall outlet with just an adapter, but my limited experience suggests some small devices don't love 50 Hz / 220 V.

Friends have suggested an ice cream shop in Paris, and that no one really wears a tux at the Grand Casino in Monte Carlo. Keep those cards and letters coming.
Posted by GaryGo at 9:37 PM No comments: