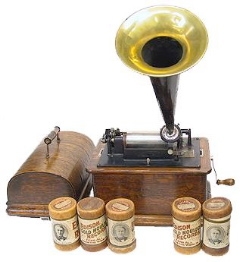 I don't understand why anyone pays for recorded music any more. Aside from shady activities like peer-to-peer sharing, podcasts and YouTube offer almost every commercial recording. I'm listening to new stuff and stuff from the days of 78 RPM, and I found two podcasts from guys who play wax roll recordings from pre-vinyl days. There is more good music than I can listen to.
Posted by GaryGo at 10:41 AM No comments:

One of the hottest summers on record in update New York comes to an end this week, at least on the calendar. My lovely wife and I took a long road trip in August to see Elizabethtown, PA, Newport News, VA, Belmar, NJ and Salem, MA. Let's hope the fall is long and not too much cooler.
Posted by GaryGo at 9:11 PM No comments:


I have been gradually updating content on the gocek domains to be more "responsive" so that the pages appear properly on full-size PC screens as well as small phone screens. One of the things publishers must worry about are advertisements. Do ads negatively impact the content? Are ads always bad for all visitors, or are some ads OK for most visitors?


The gocek domains get about 35,000 unique visitors per month, according to my hosting company’s statistics program. Details are available on the site map page. I use Google Adsense to monetize my site. I make about $25 per month from ad clicks. This pays for the hosting and domain registration fees. Ad revenue has decreased over the last year or two. The decrease is partly due to the way visitors get information these days; much internet traffic in general has transferred from web sites to phone apps. Most gocek traffic comes from web searches, rather than branded information, so a gocek app probably doesn't make sense.


Ad-blockers probably reduce my revenue. My response as a publisher is that Adsense ads support LEAN standards (see IAB LEAN). The gocek domains don't currently use HTTPS (that's the E part of LEAN), because there are no logins or financial transactions here. (I'm thinking about HTTPS, but it costs money to do it right.) You won't be exposed to huge ads here or popups/popupunders. Page load times are not noticeably affected by the ads. The ads scripts are a tiny portion of the overall page content and Google determines the context and serves the ads very quickly. Compared to a miserably slow site like Huffington Post, the gocek pages simply don't hang up your browser.


We independent publishers are aware that advertising on some sites ruined your surfing experience. However, it remains the case that the internet isn't free, and we white-hat publishers are trying to stay on the right side of the line between reasonable monetization and heavy ads that overshadow the real content.


I live near Rochester, NY and have family in Oswego, NY, so I have been making the drive along NYS Route 104 a lot for the last few months. What is it with you people? Do you really think it's just bad luck when a snowmobile rider gets hurt, or might it be related to sledding through the woods at 60 MPH while road vehicles are passing each other on the shoulder because their trailers full of tree trunks have to get somewhere as soon as possible? Do you really think the Troopers patrol 104 so heavily because they hate you, or might it be that ticketing is so lucrative for the towns due to your redneck driving behavior? Do you really think that the red light can be ignored at the intersection with Route 3 near Fulton? Doesn't the white strobe give you a hint that you really need to stop? I don't know how to describe your driving without using the word "redneck".


Pope Francis this month cleared two former popes for sainthood: John XXIII (even though he has not been credited with the traditionally required second miracle) and John Paul II (on track to be canonized eight years after his death, beating the former fast-track record of 27 years for the canonization of Opus Dei founder Josemaria Escriva). So then, why these divergences from tradition? If sainthood is important, which is clearly the position of the Roman Catholic church, isn't the process important? Regardless of Francis' authority to make these adjustments, why adjust
this process for these men? Are they just that saintly, or are do they get extra points for having been popes? I do not accuse Francis of trying to set himself up for sainthood, but what's the rush for John and John Paul? John simply doesn't have that second miracle, and John Paul left a legacy of sex-abuse coverups and Vatican scandal. I'm not saying John and John Paul would not eventually deserve sainthood, but one more time, why are they so special? If the traditional canonization process is flawed, then should all traditions be adjusted? Will we soon see women priests, same-sex marriages and birth control? Or, just more sainted popes?

I will laugh in the face of winter storm Nemo as I make Grandma's chicken soup. I suppose there's not all that much special about it. I peel the chewy strips off the celery, but still, it's just celery. It's fun to think of Grandma, though.

I used to be mildly against hydraulic fracturing. The continued exploitation of fossil fuel resources distracts us from the development of cleaner or renewable energy sources. But, then I moved from an all-electric house serviced by a cheap municipal energy provider to a house that uses both electricity and natural gas, serviced by a commercial provider that charges a LOT more for electricity. My new home's summertime energy bills were three times my previous bills. Regardless of how long New York's fracking discussions have dragged on, does anyone really believe that fracking will be outlawed in NYS forever? Opponents should be focusing on oversight rather than what I believe will be a fruitless quest for outright bans.


2016 update: Fracking is currently banned in NYS. So much for my prediction. 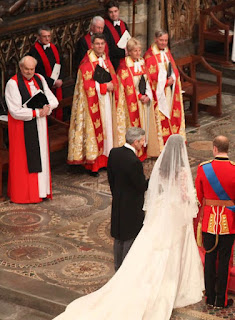 At the royal wedding of William and Kate on April 29, 2011, Archbishop of Canterbury Rowan Williams welcomed the world to his "house", that most prominent Anglican venue known as the Westminster Abbey. This was an opportunity to show off Anglicanism, the English ancestor of the American Episcopal Church. The spectacle left us wanting more of Harry and Pippa, but it was not a good day for the Church of England. The archbishop's unkempt hair and eyebrows were distracting, and one of the female "chaplains" (nuns) sitting next to Will and Kate has been the object of internet jokes about her Reeboks.

Although 65% of churchgoers and 40% of full time clergy in the Church of England are women, Canon Jane Hedges was on the altar only briefly, with no active role. Even the choir was all male. Consider that historically, Western Christian Churches supported the abuses of colonialism. The colonies are mostly independent now, but the indigenous people remain poor while Westerners get fat. Maybe the couple and the hundreds of millions of viewers wanted a fairy tale, but so what? It is not the Archbishop's job to look pretty, but it is his job to promote social justice in the name of Jesus Christ. Instead, he put trees inside the Abbey, the beautiful people oohed and aahed, and an ugly world turned even though they pretended it had stopped. 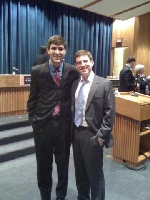 On April 9, 2011 at the University of Virginia School of Law in Charlottesville, Dan Gocek and his teammate Chris Cariello won the 82nd annual William Minor Lile Moot Court Competition. The contest began with preliminary sessions during the 2009-10 school year involving close to 200 law students. The students wrote briefs and presented oral arguments until only two teams remained. In today's final session, Dan and Chris faced Lynzi Archibald and Matt Hanson. The teams argued their points in front of federal judges who agreed to participate in the contest. Lynzi won best oralist. The four students will graduate in May, 2011. Dan passed the New York State bar exam on November 2. 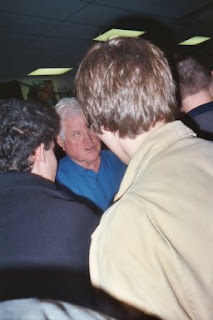 Previous winners include Ted Kennedy, that's a 2004 photo of Dan looking at Senator Kennedy, is that prescient or what?

Gary was inducted into the Liverpool Fine Arts Hall of Fame.

Posted by GaryGo at 5:13 PM No comments:

I plan to manage my blogging at blogger.com rather than directly on gocek.org as I have been doing for many years. Mainly, the issue is managing comments to blog posts. I don't get many comments, but I have been getting a lot of spam lately and a blogging platform like blogger will help me manage that. So, here's my first post for my personal blog, where I comment on web site updates and miscellaneous news events.
Posted by GaryGo at 4:22 PM No comments: