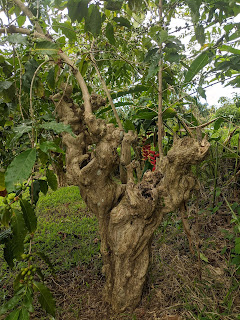 Pictured above is a 100+ year old coffee tree stump with new branches sprouting, at Greenwell coffee farm in the Kona area of the big island, Hawaii. Maybe the most interesting part of the tour for me was talking with the guide (a regular worker on the farm) about a destructive beetle. I asked him if the beetle was native and he immediately exclaimed, "No", and we commiserated about invasive species, like the ones endangering my own ash trees. But the coffee samples were great. I'm still not sure why Kona and other Hawaiian coffees cost twice as much as South American and African coffees, but labor is a huge cost, and maybe the guide was just hesitant to tell us that most coffee workers in the world aren't paid as much as American workers. There is also a geographic aspect that makes some Hawaiian coffee hard to harvest. But still, the cost difference is huge. Kona coffee is good, but not twice as good, just twice as expensive.

Earlier, Susan got a massage at the spa which was apparently extremely great, while I got my first Kona coffee pourover. We checked out the ocean beach.

Rochester, NY residents think Florida is nice, but Hawaii is at a different level. It just "feels" great.

Later Susan, Dan, Greg and Lauren went snorkeling. I don't do much in the water, so I went looking for shabu shabu joints. This consists of thinly sliced beef that is swished around in hot oil. Although shabu shabu is popular in Hawaii, the only place I found, "TK Shabu Shabu" is no longer serving the item, regardless of the name of the place. Shabu shabu is a family-style item, and this was stopped at the beginning of the pandemic.

So, I went grocery shopping at a Walmart and a KTA Super Store. We are staying in a timeshare property, so we are doing some of our own cooking.

Earlier for lunch, I had lau lau, which is pulled pork with taro leaves. 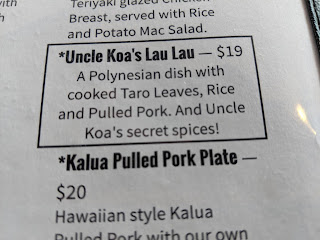 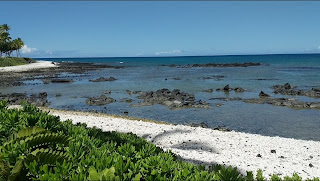