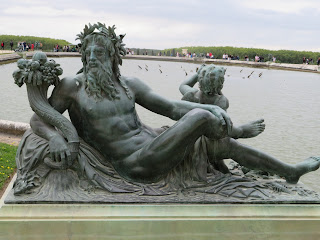 Our France trip has ended. Here are more photos and lots of random comments.
PHOTO - La Loire at Versailles. This is the guy who photobombed us.
Keep scrolling. more at the bottom.

TRAVEL AGENT - We used a travel agent and we recommend Audra at Liberty Travel, Eastview Mall. Audra's original choices for hotels were a bit more economical than we wished. We were able to spend more money to go a bit more upscale. Audra caught on to our vision and we had great rooms, great tours and a great flight.

LODGING - We stayed in two upscale (not luxury) rooms in hotels located in the midst of tourist areas. The bathtubs in these rooms seemed to be optimized for baths rather than showers, and the tub wall was over our knees. The shower doors were situated such that it was almost impossible to take a shower without getting water on the smooth tile floors. The high tub wall made it difficult to step out onto the wet floor without slipping, and there were no appropriate handles. There are no washcloths in France.

If you're staying in one place for a long time, get a bigger room.

PARKING IN TORONTO - our travel agent gave us a discount code for Park 'N Fly. Our flight left at 6:30 pm, so we did not stay over upon departure or arrival. Our 17 day parking spot had a retail cost of about $250 CA, but we paid $120 CA. 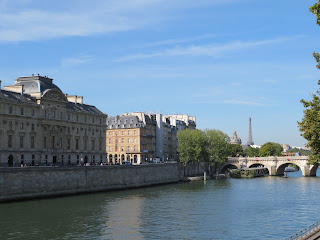 PHOTO - from the Seine cruise.
Keep scrolling. more at the bottom.

COFFEE - Almost every restaurant offers "cafe Americain" or "Americano". But, this tended to be espresso with extra water, so it was either strong or had a watered down taste. There is nothing in France that corresponds to American cream or half-and-half. As in the USA, the different styles of coffee (Americano, espresso, cafe au lait) tasted different at every venue. Gary's recommendation is just to drink espresso, but Sue doesn't care for that and wasn't very happy with the coffee until we got to the Holiday Inn at the airport, a hotel catering to business travelers. 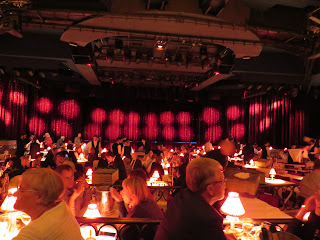 PACKING - we packed a bit too much. We used everything we packed, but we could have done with less. Unless you have a specific event to attend, you will never need to be super dressy, even in the places that supposedly have a dress code.

PRE-PLANNING - we planned A LOT, and we had a good trip, and we "planned" for some unplanned time, and we were always busy. I think this is a decision everyone needs to make. We could go to Paris again with no plans except for maybe a hotel selection, but for this first visit, it was nice to see the major sites. 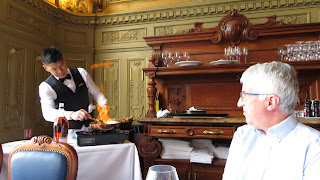 NEXUS - this program (as far as we are concerned) expedites customs checks for US citizens into and out of Canada. We had some trouble with the self-service iris scanners at the Toronto airport, but whenever we talked to a human agent, we were sent on our way with little concern (at the airport and in the car). 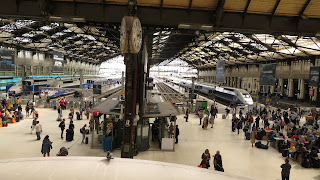 GROUND TRANSPORTATION - We learned to use the Paris Metropolitan (the subway, known as the "Metro"). This was an inexpensive way to get anywhere within the Paris city limits. To get outside the city, you need to switch to an above-ground train or a bus, which we didn't do (in Paris). Any time we moved with our luggage, we took a taxi. Uber is also an option, especially in the cities.

We took the high-speed "TGV" train to Nice and back. In Paris and Nice, the trains sit for a while on the platform (more than 15 minutes), but you don't learn your platform until 20-25 minutes before the train can be boarded. The TGV trains have reserved seating. Sometime, the TV monitors in the terminal or on the platform will indicate where your specific coach will be when the train stops, so when you get through the gate and onto the platform, you know which way to drag your luggage (and the walk can be a hundred yards). There are electronic displays on each coach displaying the coach number, and they may not be in numerical order from car to car. On the train, bring your luggage to your car and carry it up the stairs if you are on the upper level. There are luggage racks on each car. The first class cars have more space than an economy airplane seat. There is a power outlet and free wifi (not 100% reliable). There is a train car where you can buy food, but we didn't use it. There is very little security for passengers or luggage.

The train agents may check your tickets on the train. This did not happen from Paris to Nice, but they checked from Nice to Paris.

We used the local train to get from Nice to Monte Carlo because Uber does not operate in Monaco, and Monaco taxis are not allowed to leave Monaco. So, we used a taxi or Uber to get between the hotel, casino and train stations, and the train to get between stations. The walk may only be several blocks, so it depended on the time of day/night and what we were wearing. For the local trains, buy the ticket at the electronic machine at the station. I got one round trip ticket for two people. Before boarding, the ticket must be validated at the "composter" or "compostage" machine. I don't think this worked for me (hard to tell). I think I may have inserted the little ticket incorrectly. There are videos on the web, but they show large tickets, and my little ticket was the size of a business card. The composter machine is supposed to stamp the ticket, but all I saw on the machine display was "en retourner a la gauche", which means, "to return to the left", which makes no sense. Our tickets were never checked by an inspector on the local trains. 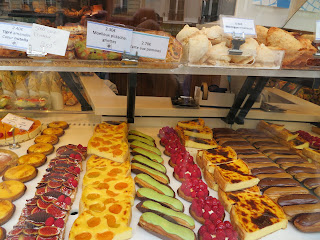 PHOTO - patisserie in Paris.
Keep scrolling. more at the bottom. 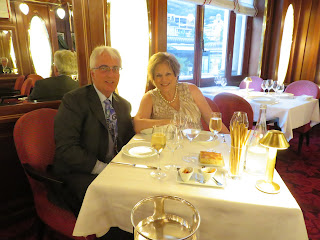 MONTE CARLO - there is a dress code at the casino, supposedly. We dressed up for dinner at Le Train Bleu, one of the fancy casino restaurants. We were not overdressed, but no one was more dressed up than we were, and about half the people did not conform to the dress code, i.e., we saw sneaks, shorts, jeans, flip flops, etc.

CELL PHONE - we paid Verizon $10 US per day to get our normal service in France. We texted and made phone calls to the USA, no problem, as long as there was a cell signal. Paris and Nice were fine. We used about 100 MB per day, mostly for maps and the occasional restaurant or sightseeing lookup.

CONNECTIVITY - we are "old school" and perform many tasks on our desktop PC. We can do some tasks on a web browser, but ideally, we wanted access to the desktop from France. So, I installed a "host" on a laptop at home and turned the laptop on in the basement with a hardwired internet connection. We had a cat-sitter in the house every day, so this kept the host laptop out of her way. The host laptop was on the house LAN, so we could connect to the host from a France laptop with a "viewer", and then remote over to the home desktop. We could have installed the host software on the desktop, but as long as I was at it, I wanted remote access to the home laptop and desktop. Our hotels had good wifi, so this was very successful. I disabled Windows updates on all three devices for the duration of the trip. Some of these steps require Windows 10 Pro (not Home). Ask me privately and I will tell you what host software we used. This software opens some network ports and checks a password to connect, and operates through a third party server. There are several choices for this sort of software, or you can configure Windows manually, but I chose to use some software.

I tried to log in to democratandchronicle.com from France to read the Rochester newspaper (the e-edition), and also USA Today, but this did not work. (The web site restricted my France IP address.) However, by remoting to the desktop, I was able to log in to the D&C, download the PDF, and transfer the PDF to the France laptop or my phone. This works because, when you're using the host/viewer software, you're actually running on the remote PC and showing a screen image on the local screen, so the IP address is a Rochester IP address.
Posted by GaryGo at 7:44 PM