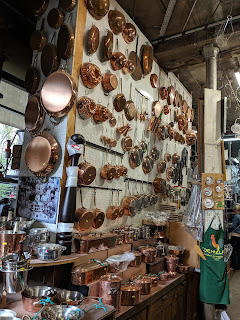 This first photo is from E. Dehillerin, a retailer for kitchen utensils and equipment (not far from the Louvre, right bank). For those of you from Rochester, Dehillerin is to kitchens as Debbie Supply is to plumbing. Thanks to Karen for this recommendation.

We went next door for an espresso and ice tea for under 10 euros on the sidewalk, a much more reasonable deal than a couple days ago at Deux Magots on the left bank. 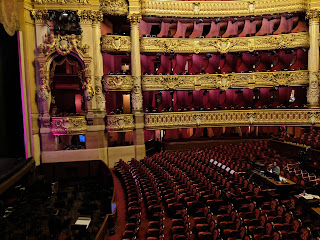 We took a guided tour of the Paris Opera House (Opéra Garnier). This is a view from the box in which the Phantom of the Opera sat. The view shows a similar box on the other side of the theatre. It is NOT the big box next to the stage, but the one next to that. On the Phantom's side from where I shot the photo, the big box next door is the "Emperor's box".

If you plan to take this after-hours tour which starts after the normal public visiting hours, let me know. You need to enter the building before the public hours end or else the guards give you a hard time (because they seem to be oblivious to the tour companies which are literally next to the security checkpoint). And the tour companies seem just as obvious to the fact that the security guards have their own schedule to keep. At the end of our tour, people from multiple tour groups were led through the gift shop, and the shop employees began having seizures because the shop was actually closed. Again, this is because the employees and tour operators were oblivious to each other. 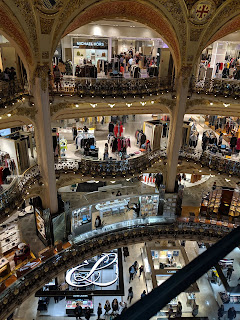 After the opera house tour, we came across Galleries Lafayette, a multi-story department store. The photo is an indoor view looking down from an observation bridge.

The merchandise here was nice, but the prices varied from reasonable to exorbitant.
Posted by GaryGo at 5:15 PM