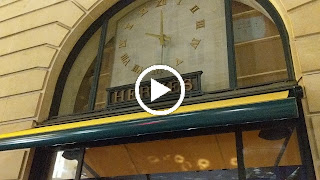 Near our hotel is a high-end fashion retailer district. There was apparently some sort of show or party at Hermes on September 5. Click the video to see the live, male model in a tux, dancing in the shop window. There were a bunch of people with their cameras out, not sure who was inside.

If you can's see the video, try a link to Facebook, https://www.facebook.com/gary.gocek.3/videos/10103392168055065/
https://www.facebook.com/gary.gocek.3/videos/10103392168055065/
Across the street, the road continues toward the presidential palace and embassy row, and there were armed police restricting traffic. Pedestrians were not restricted. This police presence was apparently not related to the Hermes event, just happened to be in the same area. 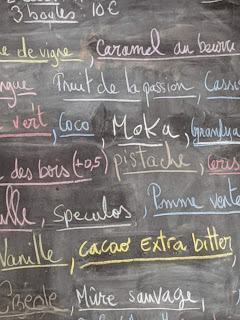 A couple people recommended an ice cream shop (Berthillon) on île Saint-Louis, and we visited on our 5th day, September 6. There are two accessible islands in the Seine within Paris, île de la Cite (on which Notre Dame sits) and île Saint-Louis.

The restaurant was OK, but Susan's shish kebob (brouchette) had to be cooked a little more, and there was just one waiter for the Friday lunch crowd. The ice cream was good, but they were out of half their flavors. It was pretty expensive, 50 euros for lunch and drinks and ice cream. A number of nearby shops were still closed past their posted lunch breaks. So, a rather unfortunate experience on île Saint-Louis, even though we managed to replenish Susan's supply of moisturizer cream, which is an accomplishment in an unfamiliar language. 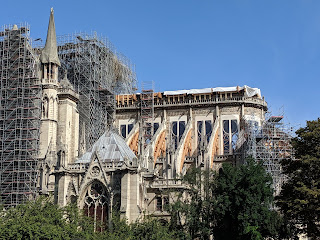 Just before lunch on day 5 (Sept. 6)  we walked around the Notre Dame Cathedral. This sits on a large city block, and at ground level, the area was completely blocked off to all public access. If there was a way into the grounds or church, we did not see it.

This photo shows a closer shot of some roof activity, compared to yesterday's post.
Posted by GaryGo at 11:03 AM