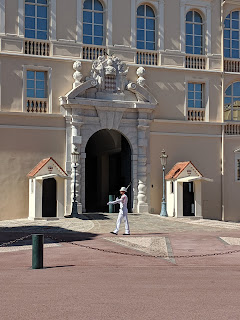 In Nice France on the 12th and 13th days of our trip, we took a driving tour around the area and went to dinner at the Grand Casino in Monaco. Photography is not allowed inside the casino, and there are ample shots of the casino on the web. We have photos from the restaurant, but on a different camera not yet downloaded.

This first photo is of the front of the prince's palace in Monaco. Monaco has 30000 residents, mostly rich. There are 6000 police and security officers.

At the casino on day 13, we just played slots. We watched roulette players for a while, but I am not a big gambler and didn't want to break in and slow things down. The stakes in the initial rooms are not steep, 5 euro minimum, but we stuck with the slots. We cashed out with a profit of 89 euros, just under 100 dollars. We did not try to go to the high-stakes rooms.

By the way, in the morning of day 13, we went to the beach and into the Mediterranean. The beaches around Nice are rocky, not sandy. It's physically tricky to get into the water and then get up to about your waist so that you aren't sliding around on the loose rocks under your feet. 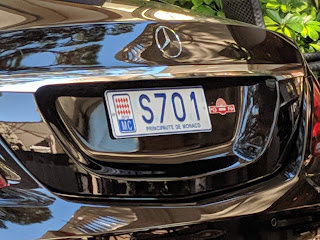 Here is a Monaco license plate. 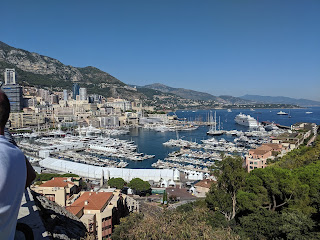 Here is the port at Monaco / Monte Carlo. The Grand Casino is on the far side of the port. This was taken from near the palace. 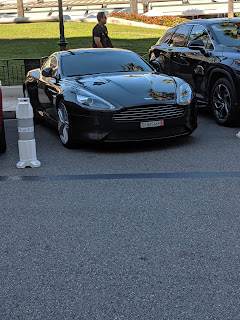 Here is an Aston-Martin outside the Grand Casino. 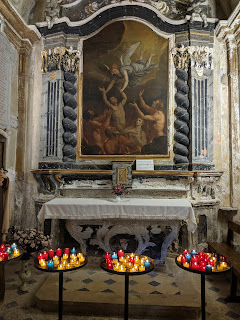 This was taken inside an 18th century church near the top of a hill in the medieval village of Eze.
Posted by GaryGo at 6:57 PM