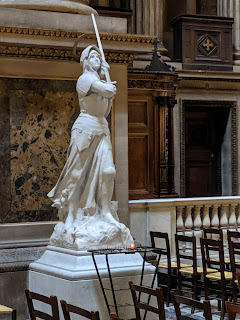 This photo is from day 2 of our France trip, that's Jean d'Arc at L'église de la Madeleine. But at dinner on day 7 (Sept 8), I had my little success at speaking French. The waiter was a goofy little guy, and the restaurant was not busy, so he talked to us now and again in decent but imperfect English, and he complimented me on my mediocre French.

I know that doesn't sound like much, but the cool thing was that I was not translating in my head. I was simply having a little joke with the waiter, en français.